As Master Gardeners, a main task of ours is educating the public, and it’s usually important to use correct terms when we are describing plants. I’m not a botanist, just an average gardener, and some botanical terms are over my head. Other terms are just plain confusing to me (or hard for my old brain to remember).
Some examples of confusion for me are the terms:
bulb, corm, tuber, and rhizome. I tend to call all of these things “bulbs,” which is not very accurate. In an effort to be more precise, I looked up the terminology. The information below primarily comes from the UGA Bulletin 918, “Flowering Bulbs for Georgia Gardens.” I also found some helpful information on the websites of some companies that sell bulbs and their kin. In addition, I referenced the book Botany for Gardeners by Brian Capon (Timber Press, 1990). 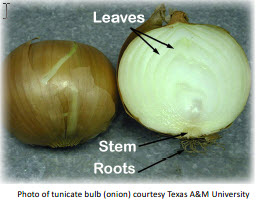 In the UGA publication, I was pleased to see that the term bulb” can indeed be loosely used to refer to true bulbs as well as other bulb-like structures (corms, tubers, and rhizomes). All of these plant parts are food storage structures for the plant. Despite their similarity, it is important to know the difference since care and cultivation of the plants may vary.

A true bulb is an underground plant part that consists of a compact stem from which roots grow (the basal plate) and a growing point that is surrounded by thick, fleshy scales that are modified leaves and provide food storage.

An onion is a good example, and when slicing one vertically you can see these structures. In many bulbs, such as onions, these modified leaves are tightly arranged in a series of rings. On the other hand, the bulbs of most lilies have scales that are loosely attached around the central structure.

There are two types of true bulbs. A tunicate or laminate bulb is covered by a papery outer skin (tunic). Examples are the onion, daffodil, and tulip.

Non-tunicate or scaly bulbs do not have this papery covering. Examples are lily bulbs. 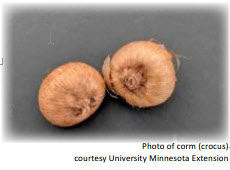 Externally a CORM may look similar to a bulb, but the internal structure is different. A corm is a solid, thick, rounded, underground stem with a basal plate. It does not have any separate scales-like leaves. When cut in half vertically a corm will appear solid without the layers (such as are seen in an onion).  A stem sprouts from the top of the corm, and then flower buds emerge from the stem. Examples are crocus, gladiolus, and freesia.

A tuber is a modified food storage structure that develops on underground stems. It develops eyes (or buds) on the surface of the structure, and shoots grow up from these eyes. Examples of tubers are the Irish potato and caladium. 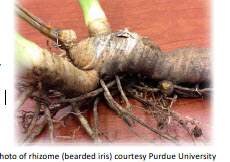 A rhizome is an underground, modified, fleshy stem that grows horizontally on or near the soil surface. The structure, both internal and external, is the same as in a true stem.  Roots form on the underside of the rhizome: leaves and stems sprout from the top.Examples of rhizomes are bearded iris, canna lily, ginger, and Solomon’s seal. 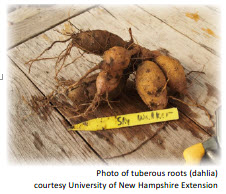 A tuberous root is similar to a tuber in that it is a swollen, food-storage structure. However, it is located at the base of the stem.  Examples are Sweet Potato and Dahlia.

Thanks for Signing Up for Our Newsletter, we will email you our next issue and look forward to seeing you at one of our events or programs…..